The push to lower global greenhouse gas emissions has seen an increasing amount of early-stage capital flow to companies developing decarbonization solutions. Climate-tech startups raised $53.7 billion from venture capital and private equity (VC/PE) in 2021, according to our latest Investment Radar. Almost $22 billion of the total went to the transport sector, in technologies ranging from lithium-ion batteries to electric aviation.

BNEF defines ‘climate tech’ as technologies and business models that act to decarbonize six sectors: energy, transport, buildings and infrastructure, carbon and climate, industry and agriculture. Energy and transport have typically been the most popular areas for investment, accounting for over two-thirds of funding last year, although the nascent agriculture sector has been gaining traction. 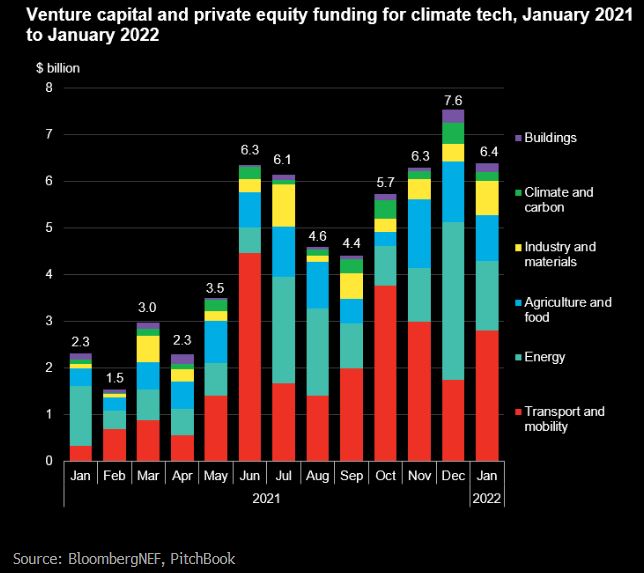 Accelerators, angel investors, seed funds, venture capitalists, and private equity firms poured $7.6 billion into climate-tech startups across December 2021 and January 2022. Temasek was the most active investor during the period, participating in six funding rounds, including the $200 million raised by Indian electric scooter marker Ola Electric last month. The Singaporean investment company has continued to expand its climate-tech footprint in February, partaking in the $100 million Series A round of faux chicken developer Next Gen Foods.

Transport startups attracted $4.5 billion of capital over the last two months, which includes a $939 million late-stage funding round from SVOLT, the battery company spun off from Chinese car manufacturer Great Wall Motor. The most popular technologies to invest in have been electric vehicle battery solutions, EV charging firms and ride-hailing platforms. The majority of these companies are based in China, highlighting the country’s evolving market.

Meanwhile, December was the most lucrative month for the energy sector to date, as startups raised $3.4 billion. A big driver was the $1.8 billion fundraiseby nuclear fusion company Commonwealth Fusion Systems, backed by investors such as Breakthrough Energy Ventures, FootPrint Coalition and Future Ventures.