London and New York, March 23, 2022 – The wind industry posted another record for new commissioned capacity in 2021, as total additions fell just short of 100 gigawatts for the second year in a row, according to a new report by research company BloombergNEF (BNEF).

BNEF’s 2021 Global Wind Turbine Market Shares report finds that developers brought online some 99.2 gigawatts of wind turbines globally in 2021, edging past the 98.5 gigawatts commissioned the previous year. While the majority was added on land (83%), additions of new offshore turbines rose to 16.8 gigawatts – a 161% increase compared with 2020.

Vestas regained its spot at the top of the ranking, adding 15.2 gigawatts worldwide. This is a 3.2-gigawatt lead on its nearest competitor, Goldwind, which was in second place with 12 gigawatts. Siemens Gamesa took the third spot in the ranking. General Electric, the previous year’s leading turbine maker, fell to fifth place as installations dropped 22% in its home market the U.S. The figures draw on BNEF’s global database of wind projects and extensive information from the industry.

“A new era of wind build is truly under way – a second near-100-gigawatt year represents a new status-quo for the industry,” said Isabelle Edwards, senior analyst at BloombergNEF and lead author of the report. “As governments worldwide set net-zero ambitions targeting wind build several multiples higher than today, the wind industry has proved it can deliver sustained growth.”

BNEF identified 55.8 gigawatts of new wind capacity commissioned in China last year. Despite global commodities inflation and supply-chain chaos, annual installations in China were only two gigawatts shy of the record set in 2020.

The scheduled end to the China’s offshore wind feed-in tariff saw developers install 14.2 gigawatts of offshore wind turbines, a threefold jump (251%) year-on-year. China’s Shanghai Electric, Mingyang, Goldwind and CSSC Haizhuang capitalized on this growth to take the top four spots in BNEF’s offshore wind ranking. Siemens Gamesa, which had been top of the rankings since 2017, slipped down to sixth place, just behind Vestas.

“China dominated the offshore wind market as the industry yet again showed what it can do when subsidies are on the line,” said Oliver Metcalfe, head of wind research at BloombergNEF. “As offshore installations drop off in China in 2022, other markets are set to fill the gap. The U.K. will add more than three gigawatts of offshore wind for the first time this year, while activity will also pick up in new market Taiwan.”

The U.S. remains the second largest market for new wind build, adding 13 gigawatts in 2021. Together with China, it accounted for two-thirds of new global wind capacity last year. Vietnam broke into the top three global wind markets for the first time, bringing online 3.6 gigawatts of onshore and near-shore wind farms.

“Policy continues to play a major role in driving the global wind market, as developers chase feed-in tariffs where they’re still on offer,” said Edwards. “We saw an onshore wind boom in China and the U.S. in 2020, while last year the focus shifted to China’s offshore market and Vietnam.” 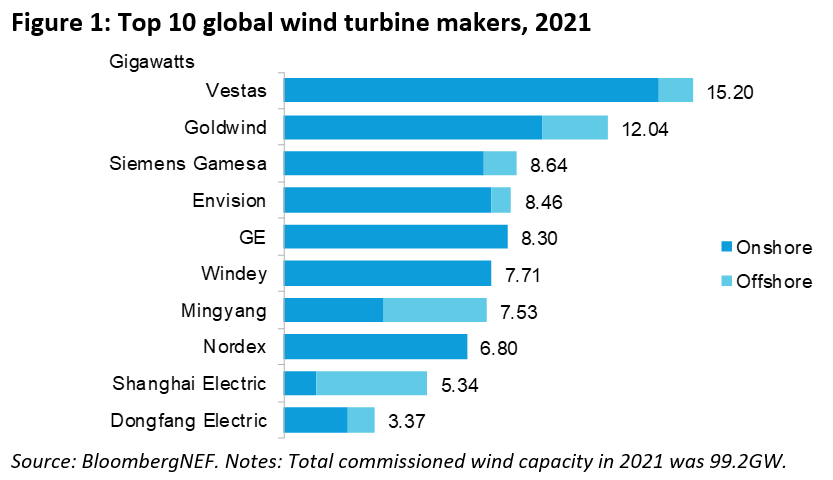