The cars of the future will depend increasingly upon supplies of an obscure metal from a country in the African tropics where there has never been a peaceful transition of power and child labor is still used in parts of the mining industry.

Most major automakers are pledging to build millions of electric vehicles as the world’s governments crack down on climate-damaging emissions from traditional-fuel engines. As a result, demand is surging for lithium-ion batteries and the materials needed to make them — including cobalt, a relatively rare substance found mostly in the Democratic Republic of Congo. 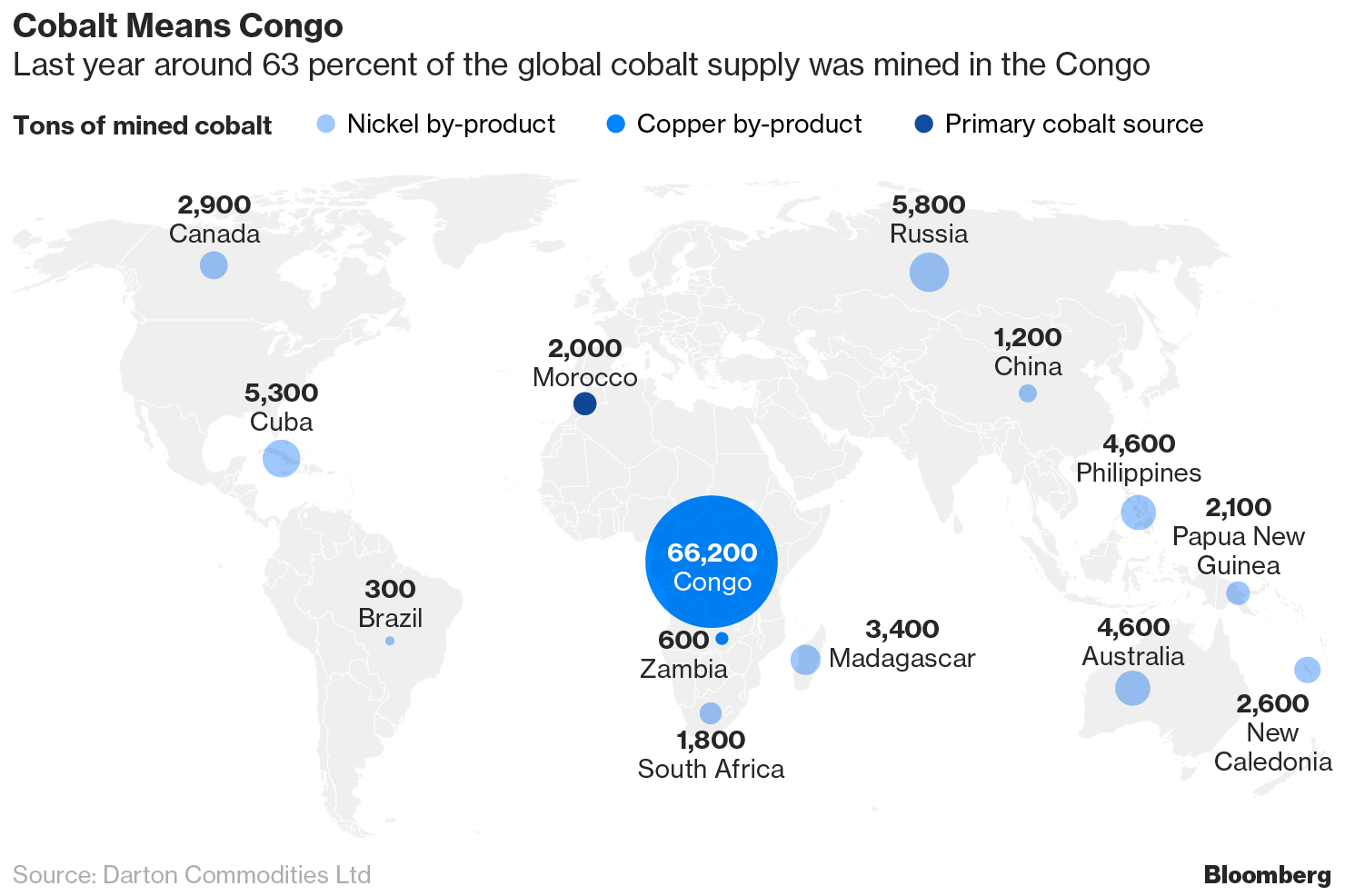 The country formerly known as Zaire — which hosted boxers Muhammad Ali and George Foreman for their 1974 heavyweight title bout dubbed the “Rumble in the Jungle” — supplies 63 percent of the world’s cobalt. Congo’s market share may jump to 73 percent by 2025 as producers like Glencore Plc expand mines, according to Wood Mackenzie Ltd. By 2030, global demand could be 47 times more than it was last year, Bloomberg New Energy Finance estimates.

“There are lot of grand plans being put in place by automotive manufacturers, but not many of them seem to have considered the cobalt-supply chain,” Gavin Montgomery, director of cross-commodity analytics at Wood Mackenzie in London, said in an interview.

Few commodity markets are so dominated by one supplier, and that presents a problem for the world’s automakers.

Cobalt is a byproduct of copper and nickel mining. Until recently, there were often surplus supplies as it was used mostly to harden steel. But the bluish-gray metal’s ability to efficiently conduct electricity has made it essential for high-end rechargeable batteries. A typical power unit in an electric car contains about 15 kilograms (33 pounds) of cobalt, though some varieties use less than 5 kilograms.

Over the next two decades, the global fleet of electric vehicles may reach 282 million, or about 16 percent of all cars on the road, BNEF analysts estimate.

Tesla Inc. has more than doubled vehicle unit sales since 2014, and is targeting 500,000 for next year. Volkswagen AG plans to invest 20 billion euros ($24 billion) by 2030 to roll out electric vehicles, with another 50 billion euros earmarked for batteries. Volvo Car AB says it will have five electric models in its lineup by 2021, while Daimler AG, the owner of Mercedes-Benz, is investing $1 billion to ramp up electric-vehicle production in the U.S.

With demand growing, mining companies including Glencore, Eurasian Natural Resources Corp. and China Molybdenum Co. are pouring more money into the Democratic Republic of Congo, which has by far the most proven reserves.

While the country has been a reliable producer for more than a decade, it is still recovering from a brutal civil war that cost millions of lives and crippled the mining industry before peace arrived in 2003.

President Joseph Kabila — who’s father seized control of the country after overthrowing Mobutu Sese Seko in 1997 only to be assassinated four years later — refused to give up power after his term expired last year. Since taking over in 2001, the 46-year-old Kabila and his family have built a vast business network that reaches every corner of the economy, including mining interests. Most of the country’s export income comes from mining.

Citing the escalating political tensions, S&P Global Ratings in August lowered its rating on Congo’s debt and currency, after similar cuts by other rating companies. Cobalt prices on the London Metal Exchange have more than doubled in the past year to $60,125 a metric ton.

“The cobalt-supply dependency on the Congo is a risky situation,” said Andries Gerbens, an analyst at cobalt trader Darton Commodities Ltd., based in Guildford, U.K.

With cobalt prices rising, the government is aware of its dominant position and is already looking for ways to increase its control of assets and opportunities to profit, Gerbens said. Earlier this month, Kabila urged the legislature to fast-track planned changes to mining laws that would to increase royalty payments on cobalt to 3.5 percent from 2 percent.

Increased attention from officials also can lead to supply disruptions that affect prices. Last month, the government blocked copper and cobalt exports by the China-Congo joint-venture Sicomines in a dispute over local refining. In another case, state-owned Gecamines SA in March challenged its joint-venture partner over control of their GTL-STL cobalt project in Lubumbashi that produces 5,000 tons a year. Output at the facility has ceased.

Of further concern to automakers is that some Congolese cobalt comes from informal mines that Amnesty International alleges may rely on child labor. Artisanal mining is legal in Congo but poorly regulated. In 2014, the government estimated as much as 14,000 tons of its cobalt exports, or 20 percent, came from these informal diggers. By last year, that share fell to 8,600 tons, according to Darton, as the government cracked down on illegal mines and technology companies including Apple Inc. and Samsung Electronics Co. came under public pressure to more fully vet their supply chains.

Still, it remains difficult for battery makers to know where their cobalt comes from. More than half of the world’s supply of the refined cobalt chemicals used to make the rechargeable power units comes from China, which gets 90 percent of its cobalt from Congo.

The combination of political and operational complexity has proven too challenging for some investors.

First Cobalt will instead concentrate on Canadian prospects, while other startups are exploring in Australia. Neither country has Congo’s proven reserves.

“They’re all very small projects compared to what is happening in Congo,” Wood MacKenzie’s Montgomery said. 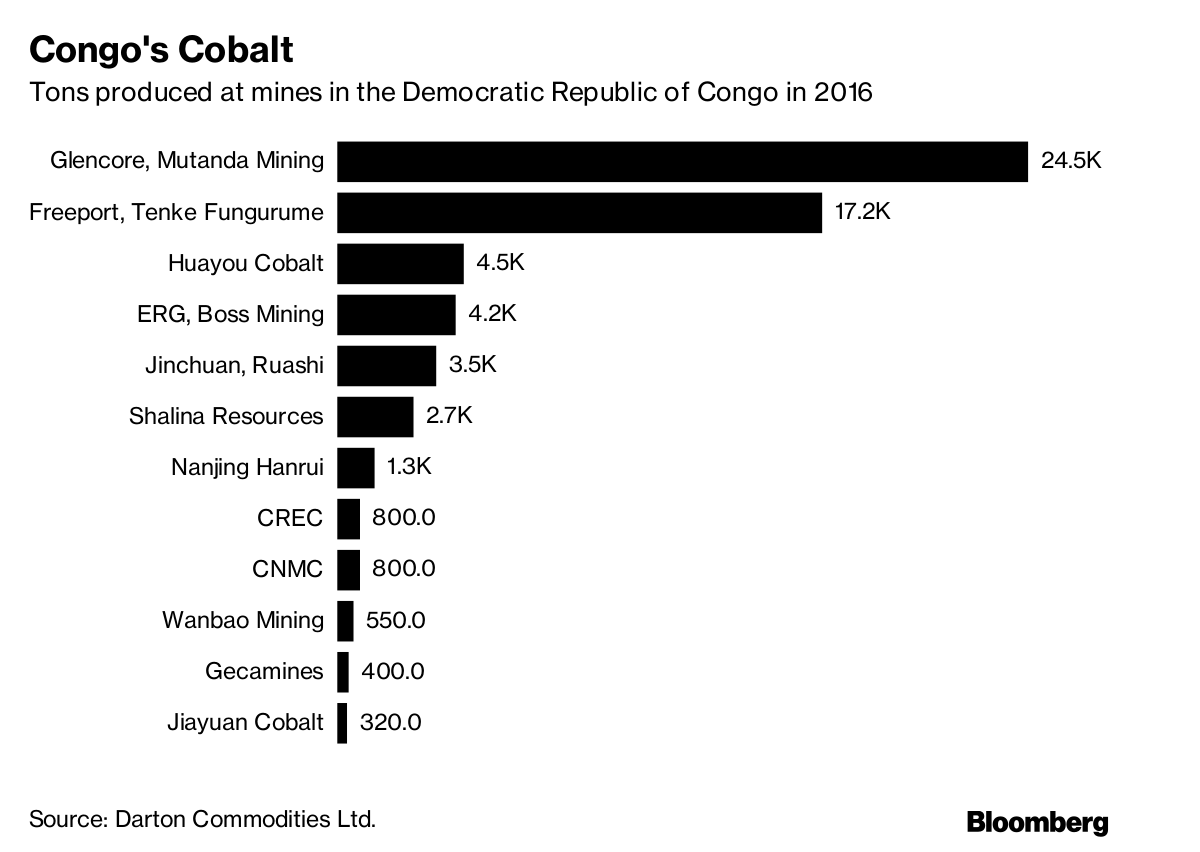 Changes that Congo made to mining laws in 2002 led to huge investments in the country’s copper and cobalt projects, which sparked a decade-long surge in production, dominated by Baar, Switzerland-based Glencore. The company shipped 24,500 tons of cobalt from its Mutanda mine last year, 40 percent of Congo’s output and almost a quarter of global production. That share will only increase in 2018, when Glencore’s Katanga Mining project resumes after a two-year suspension. The mine should produce 300,000 tons of copper and 20,000 tons of cobalt by 2019, Chief Executive Officer Ivan Glasenberg told analysts in August.

Eurasian Resources, based in Kazakhstan, also plans to boost production in Congo. The company will produce another 14,000 tons a year from its Metalkol Roan operation when it starts in late 2018, CEO Benedikt Sobotka said in June.

Chinese companies also are expanding in Congo. Last year, China Molybdenum acquired the Tenke Fungurume copper-cobalt mine, south of Glencore’s Mutanda, from Freeport-McMoran Inc. for $2.65 billion. Seven of the 10 largest producers in Congo in 2016 were Chinese owned.

Meanwhile, new investors keep turning up, according to Serge Ngandu, director at African mining company Madini Minerals, which owns cobalt properties in the country and is looking for partners.

“If you want to become a player in the cobalt market, you need to be in the DRC,” Ngandu said.