Where Green Incentives Led to a Surge in Palm Oil

What started as a way to cut Japan’s dependence on imported fossil fuels has led to an expected surge in a different and equally controversial shipment: palm oil.

Government incentives instituted in the wake of the Fukushima disaster in 2011 guarantee prices for power generated by renewable sources such as solar, wind and biomass. Palm oil, scorned by some environmentalists who say its production destroys rain forests and peatlands, is becoming more popular because facilities that burn it are among the cheapest to build. 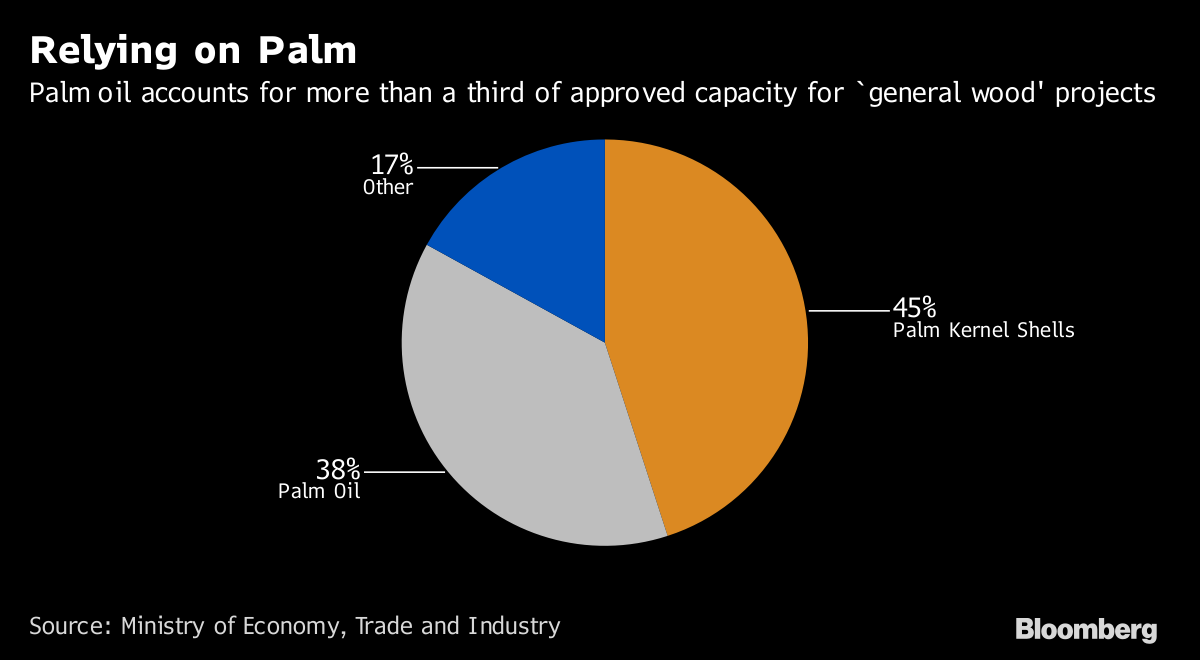 Government approvals for projects that utilize “general wood” materials, a category that includes palm oil, almost quadrupled in the year through March. The category’s total capacity approved since the program began in 2012 soared to 11.5 gigawatts, up from just 3 gigawatts in 2016, and palm-oil projects account for almost 40 percent, according to government data.

“The program is flawed,” said Miyuki Tomari, who heads the Biomass Industrial Society Network, a non-profit group promoting the use of sustainable biomass resources. “What had been expected of the feed-in tariff originally was to utilize unused wood materials from forests in Japan,” she said, referring to the government guarantees backing the projects.

Proponents of burning wood and other biomass say it’s more reliable than solar or wind, because it can supply power continuously, not just when the sun is shining or the wind is blowing. Its use reduces the need for fossil fuels, they say, and carbon released while burning biomass doesn’t harm the environment because it’s offset by carbon removed from the atmosphere when the organic material was growing.

“Palm oil is carbon-neutral, while with fossil fuels, the more you use the more CO2 is emitted,” said Masaru Kubo, vice president of Osaka-based Sankei Energy Co., which built a 2-megawatt plant to burn the fuel. “We think using palm oil will help deter global warming,” he said, adding that he’s hopeful there will be more certified palm oil available to ensure the sustainable use of the fuel.

But the impact calculation can get complicated. In deciding the value of palm oil, the math has to account for extra emissions caused by the draining and burning of carbon-rich swamps known as peatlands and tropical forests that are destroyed to make way for oil palm trees, according to the Union of Concerned Scientists. Most of the trees are grown in Malaysia and Indonesia.

Taking into account those land-use changes, emissions from burning palm oil are more than twice as high as coal, according to a report by Takanobu Aikawa, a senior researcher at the Renewable Energy Institute in Tokyo. Aikawa said imported biomass fuels weren’t excluded when the feed-in tariff program began, but plants that use forest materials were given a higher rating to support domestic products.

“What had been anticipated were pellets and chips and maybe palm kernel shells, and they are all solid biomass fuels,” Aikawa said. Liquid biomass such as palm oil is “hardly used in power generation worldwide, so it was totally unexpected.”

Another potential downside: Palm oil is an ingredient in dozens of products, from skin moisturizers to snack foods, which means diverting it to biofuel plants could be raising prices for consumers.

Eneres Co., a Tokyo-based energy-management company with two plants that use palm oil, said the material used in power plants is typically just a byproduct from refining the edible kind.

As for the impact planting has on carbon-rich lands: “We are not in a position to assess the impact and situation on the destruction of rain forests and peatlands, as well as carbon dioxide emissions at this point,” Eneres said in an email. “We will collect information on those issues as well as pay close attention to the government’s position and guidance.”

Takuya Yamazaki, the official in charge of the incentive program at the Ministry of Economy, Trade and Industry, said it plans to have more discussions with the government-appointed tariff-setting committee to ensure the program remains “sustainable.”

The government’s goal is for biomass to provide as much as 4.6 percent of Japan’s power by 2030, or as much as 7.3 gigawatts. As of March, the country had about 3.2 gigawatts of biomass capacity.

The economics help explain palm oil’s popularity. A power plant that uses palm oil for a diesel engine generator is cheaper and requires less space than many other types of biomass facilities, industry lobbyists say. Construction costs about 210,000 yen ($1,840) a kilowatt, compared with 410,000 yen for plants using wood pellets and chips, yet they all qualify for the same feed-in tariff, according to the Biomass Power Association. And palm-oil facilities take up far less land than solar and wind operations.

Most of the proposed palm oil projects have yet to be built, and developers might be getting ahead of themselves in filing so many applications for approvals, according to Riki Ikeda, managing director of the BPA.

“There are very few palm-oil projects in operation in Japan, and developers filed applications with an optimistic view,” Ikeda said at a tariff-setting meeting. He expects less than a third of the proposed projects to make it to completion.

Even for projects that use wood pellets and palm-kernel shells, only about 10 percent to 20 percent of planned capacity will actually come online, according to Takeshi Yamamoto, chairman of an industry lobbying group in Tokyo that was founded last year.

“With solar, you just need land, and you are done once you place an order to panel makers and ask someone to put them up,” said Yamamoto, who’s also deputy general manager for the domestic power business at Marubeni Corp. “With biomass, you need a long-term plan for fuel supply and good credit. The scale of difficulty is completely different.”