As wind becomes the incumbent technology in many markets, it will shoulder greater power system responsibilities, and face more scrutiny over its sustainability. Offshore wind is finally coming of age, as countries across Asia and the Americas seek to replicate Europe’s booming market. The competitive landscape, and how these companies make money, is also changing. The BNEF wind team sat down in April 2021 to discuss these industry trends and more.

An annotated version of the conversation can be found here, with some key topics highlighted below. Read the entire interview with our wind team here.

Wind energy is on the road to incumbency. In the U.K. for instance, by 2025 we start to see periods where the U.K. grid is entirely supplied by clean power. If you fast forward to 2035, those periods are going to be commonplace and as that happens, the role of the wind turbine really needs to evolve. We will start to see the emphasis shift toward turbine capability and away from cost-competitiveness.

Implications for wind’s aging asset base

Wind was one of the first clean energy technologies supported at scale, starting back in the 1980s. The upshot is that many turbines in early markets have reached the end of their design life. Owners have to make difficult decisions about what to do with those assets, deciding whether they can eke out additional revenues or whether they will have to start thinking about decommissioning costs. We estimate around 4GW of projects reached that 20-year lifetime point in 2020 alone around the world. That will balloon to almost 40GW by 2030. Asset owners are making different decisions across markets, depending on the subsidy schemes that are in place and the regulatory framework.

There is also still no commercially viable way to fully recycle the composite materials like glass fiber in blades. There has been some progress on this front. Asset owners, turbine makers and academic institutions are working together to improve the commercial viability of recycling technologies. Vestas recently announced it is three years from commercializing a blade recycling technology. 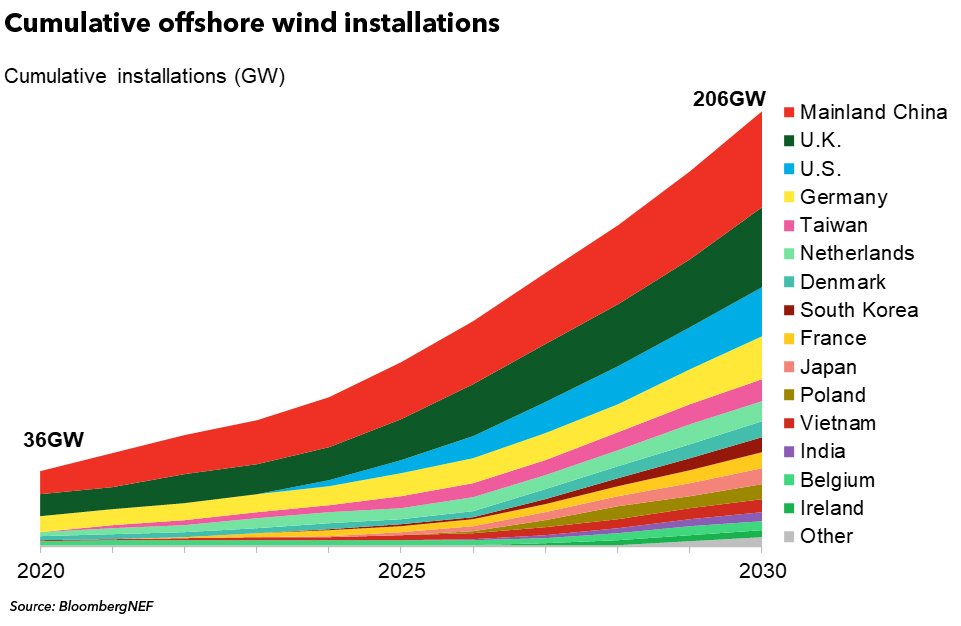 We are projecting about a six-fold growth from 30GW today to more than 200GW by the end of the decade. Much of the momentum will come from new markets, particularly in Asia. These projects are typically larger than onshore projects and can access high wind speeds at sea, meaning they generate huge amounts of electricity. Offshore wind can also be used to produce hydrogen, which further strengthens the deep decarbonization opportunity.

Outside of China, there are about five major players, down from about 10 in 2015. This includes leaders like Vestas, GE, and Siemens Gamesa. There has been significant M&A activity in this space in recent years and last year just five companies accounted for 94% of all installations outside of China.

Today’s global wind supply chain comes from four major regions: Europe, India, China, and the U.S. Each of these regions can essentially produce all the major components in a wind turbine. With newer, emerging markets and local content requirements, there will be a push for supply chain companies to set up new factories in the U.S., Taiwan, Korea or Japan.