Get the executive summary

The New Energy Outlook (NEO) is BloombergNEF’s annual long-term analysis on the future of the energy economy.

Now covering transport, industry and buildings in addition to its traditional focus on the power sector, NEO leverages the combined expertise of more than 65 BNEF analysts across 12 countries to offer a unique assessment of the economic drivers and tipping points that will shape these industries to mid-century, and paint a picture of the energy economy in 2050.

This study is considered an invaluable input to CEOs, investors, strategists, and policy thinkers to support long-term planning. Read the press release here.

1. Our Economic Transition Scenario (ETS) is our core economics-led scenario that employs a combination of near term market analysis, least-cost modelling, consumer uptake and trend-based analysis to describe the deployment and diffusion of commercially available technologies. Over the long-term we remove policy drivers to uncover the underlying economic fundamentals of the energy transition.

2. Our NEO Climate Scenario (NCS) investigates pathways to reduce greenhouse gas emissions to meet a well-below-two-degree emissions budget. This year we have focused on a clean electricity and green hydrogen pathway. In future analysis we will look at other pathways to deep decarbonization.

3. The final section is called Implications for Policy. This offers BNEF perspective on some of the most important policy areas that emerge from our two core scenario analyses.

1. In our core Economic Transition Scenario, global carbon emissions from energy use drop 8% in 2020 and now appear to have peaked in 2019. They rise again with economic recovery toward 2027 but then decline 0.7% year-on-year to 2050, putting the world on track for 3.3 degrees of warming in 2100. To keep global warming well below two degrees, emissions need to fall 10 times faster, at 6% year-on-year to 2050. For 1.5 degrees, the required rate is 10%. In total, Covid-19 subtracts some 2.5 years’ worth of aggregate emissions over the next 30 years.

2. Wind and PV grow to meet 56% of world electricity demand in 2050, with batteries, flexible demand and peakers in support. Leading countries go as high as 70-80% before hitting economic limits. Wind retakes the lead from solar.

3. Renewables and batteries capture 80% of the total $15.1 trillion invested in new power capacity. Around $2 trillion or 13% is invested by households and businesses. Asia Pacific attracts 45% of all new capital. To enable the power system of the future, $14 trillion in grid investment is needed between now and 2050.

4. Oil demand peaks in 2035 and then falls 0.7% year-on-year to return to 2018 levels in 2050. Electric vehicles (EVs) reach upfront price parity with Internal Combustion Engine (ICE) vehicles before 2025, spurring faster adoption thereafter. The growth of EVs offsets demand growth in aviation, shipping and petrochemicals, and shapes the future of oil.

5. Gas is the only fossil fuel to grow continuously through the outlook, gaining 0.5% year-on-year to 2050. Cumulative growth of 33% in buildings and 23% in industry is balanced by declining gas use in power where consumption peaked in 2019 – although gas-fired power capacity continues to grow worldwide. Cheap gas ultimately slows the energy transition in the United States.

6. Coal demand peaked in 2018 and collapses to 18% of primary energy by mid-century, from 26% today. It is in freefall across Europe and the U.S. Coal-fired power peaks in China in 2027 and in India in 2030. But, despite improvements in energy efficiency and recycling, primary coal demand continues to grow in industry.

7. In the NEO Climate Scenario, our clean electricity and hydrogen pathway requires 100,000TWh of power generation by 2050. This power system is 6-8 times bigger than today’s, has double the peak demand, and generates five times the electricity. Two-thirds of this electricity goes to direct electricity provision in transport, industry and buildings. The rest is used to manufacture green hydrogen.

8. Green hydrogen provides just under a quarter of total final energy in 2050 under our Climate Scenario. This needs 800Mt of fuel and 36,000TWh of electricity – that’s 38% more power than is produced in the world today. This could be met with a further 14TW of renewables or 4TW of new nuclear. The renewable route might be cheaper but land is an issue.

BNEF clients can access the full report, its breakdown by technology and region, as well as the underlying Excel data and previous editions. Go to the client page or access on the Bloomberg Terminal.

High-level findings of NEO 2020 are available in a free executive summary, simply complete the form below to receive access instructions via email. 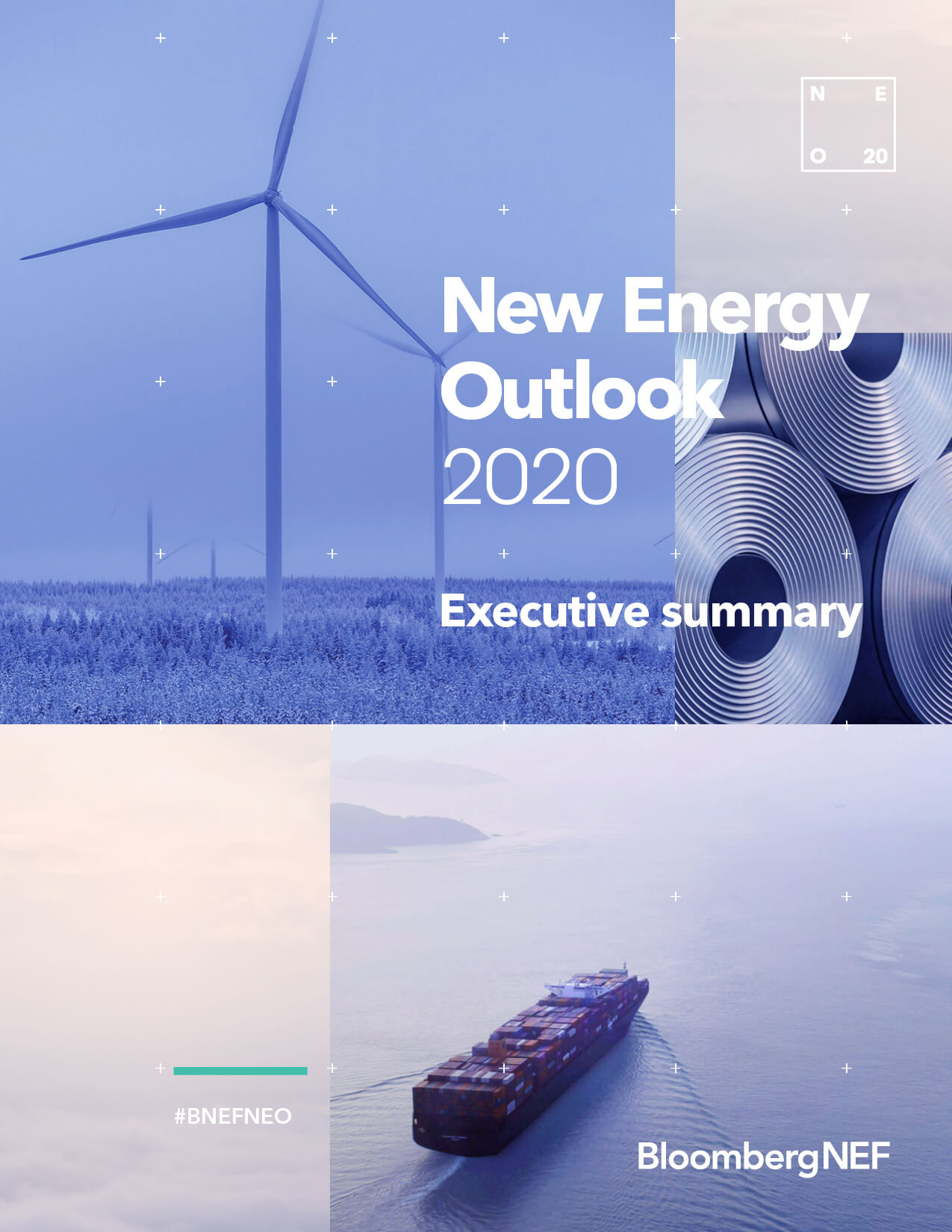